South Lanarkshire College has over 5,000 students on their roll in East Kilbride. Before engaging with Cycling Scotland, a travel survey, as well as regular engagement with college staff and students, had highlighted that lack of access to bikes, low bike ownership and little awareness of campus cycling facilities were posing a major barrier to the uptake of cycling on campus.

Sustainability is one of the South Lanarkshire Colleges (SLC)’s core strategic principles, and despite increasing numbers of students, they have managed a 51% carbon footprint reduction since 2009. Whilst impressive, they identified active travel as an area they still needed to improve on.

Getting the wheels in motion

SLC started engaging with the Cycling Friendly Campus programme in 2016 and for the past few years have benefitted from having a funded Campus Cycling Officer through Cycling Scotland’s internship programme. They have also been supported by a Sustainable Travel Officer, through Paths for All funding, to promote cycling and other sustainable travel modes within the college.

In November 2018, South Lanarkshire College were awarded £3,900 from the Cycling Friendly Campus development fund in order to purchase 6 hybrid pool bikes which could be rented at an affordable cost. The fund also covered promotional materials, including maps and banners, which further promoted awareness of cycling as a feasible way to travel. The project has had a clear impact, with the Sustainable Travel Officer reporting an increase in cycling rates over the duration of the project. 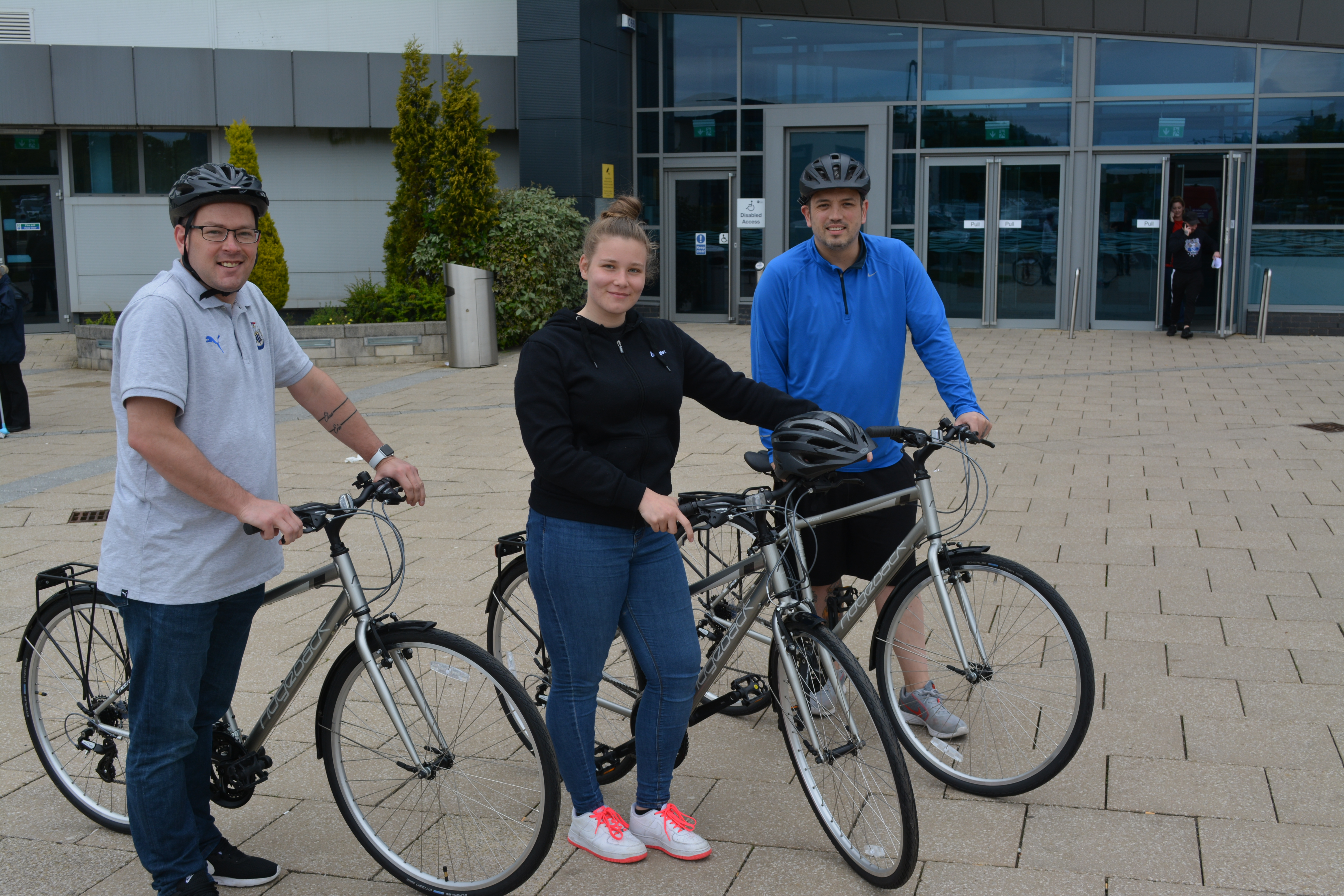 The fund has gone a long way to help address the issue of low bike ownership, and the affordability of the scheme has ensured that no one is excluded. One of the regular users of the pool bike scheme remarked that they would not have been able to afford a bike otherwise – and  especially not one of the quality of the pool bikes – and that the pool bikes have significantly shortened the length of his commute. This impact is clearly being felt around the college, with bike ownership rates increasing from 27.1% to 33.2% over the course of the project, and members of staff are getting involved in cycling events such as a North Coast 500 cycle, and an Edinburgh to St Andrews charity ride.

Getting out and about on bikes

The availability of bikes has also allowed the previous Cycling Officer and the current college Sustainable Travel Officer to take students and staff on led bike rides. Rides are relaxed, social and the participants are encouraged to look after and support each other. Participants were often less confident staff and students, and therefore the rides have had a big impact on increasing on-road cycling confidence.

The impact of becoming a Cycling Friendly Campus

When talking about the impact of working with Cycling Scotland, Sustainable Travel Officer Aiste Garneviciene was full of positives, saying that even after receiving the funding  they “continue to support the college by offering advice and free training as well as recommendations on how we can carry on with improving cycling environment” and that they “cherish our partnership”.

Specifically talking about the fund, Aiste recommends any organisation looking to promote cycling to apply: “it provides a great opportunity not only to carry out necessary improvements to facilities or raise awareness about cycling but also develop new partnerships in the area of active travel”.

Through their efforts in promoting cycling, South Lanarkshire College have been awarded the Cycling Friendly award with distinction. As well as being a celebration of their achievements, Aiste remarked that the award and the assessment before it provided an opportunity to “critically evaluate where the college stands in terms of providing cycling facilities”. It has been well received at the college and is seen as a valuable opportunity to encourage more college staff and students to get on their bikes.