Bike storage is a social justice issue: here’s why

When we talk about ‘infrastructure’ designed to get more people cycling, people might think first of new routes and separate cycle paths, but having somewhere safe to store a bike is also a vital facility. If you have nowhere to safely store a bike, you’re unlikely to take up cycling, and this issue particularly affects people on lower incomes.

Earlier in the year, I visited Angus Housing Association in Dundee, to see how their residential bike storage was having an impact and helping more people to cycle.

Setting the scene: the Whitfield estate

In the north of Dundee, the Whitfield estate was built in the late 1960s to replace poor quality tenement flats built hastily due to a boom in the jute industry. Built using the Scandinavian ‘Skarne’ prefabrication layout, the estate was innovative for its time: interconnecting horseshoes of buildings which were designed so that you could cross from one side of the estate to the other without having to cross a road.

The area suffered from poverty, high levels of crime and anti-social behaviour and the estate was largely demolished in the 1990s, though some of the original buildings remain today. 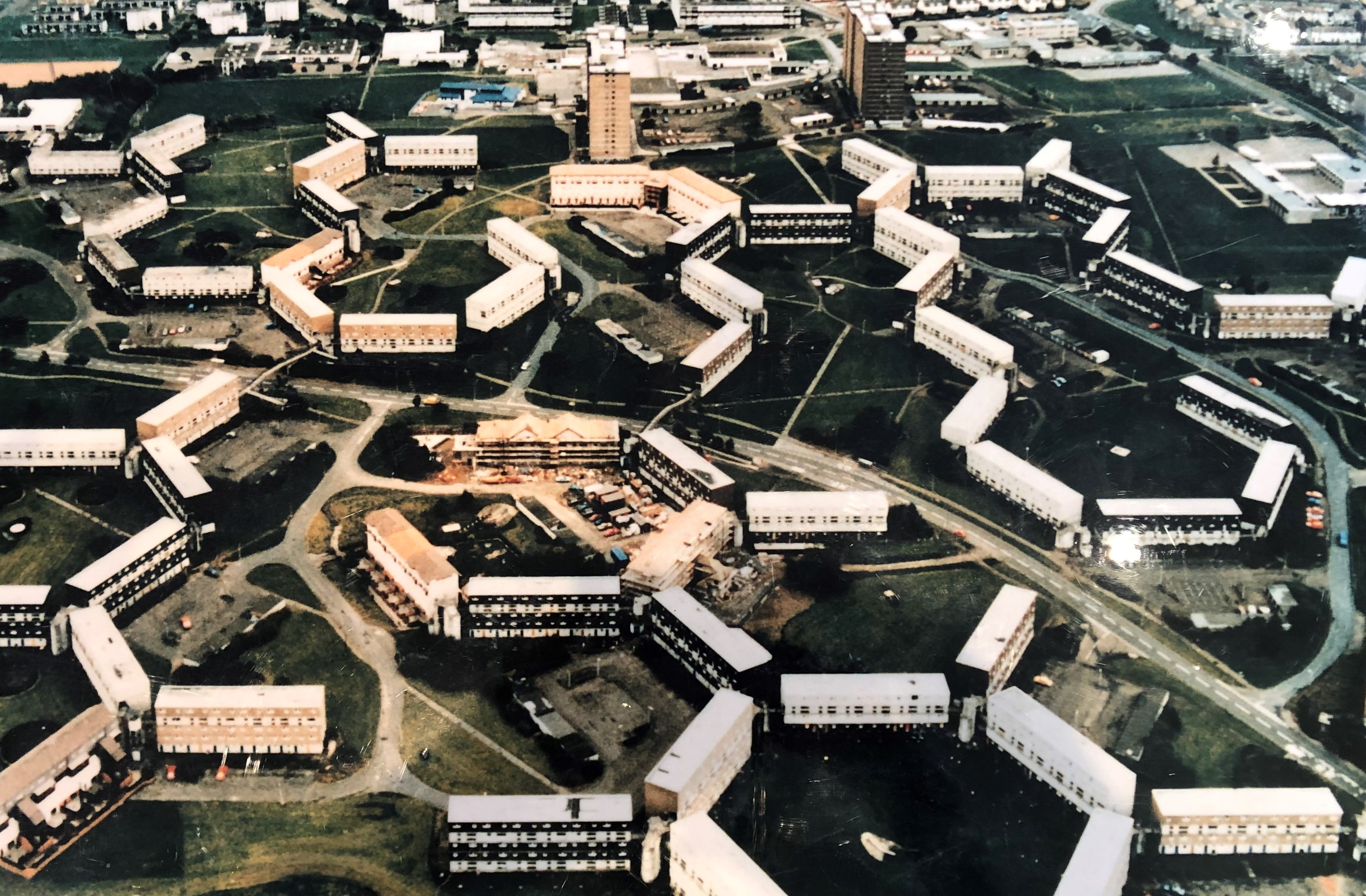 Most of the housing is now flatted properties, a couple of stories high.

Lydia Banks, Tenant Engagement Officer, showed us around and it was easy to see how challenging it would be to store a bike here. Flights of steps up to the front door, internal stairways and narrow hallways would make it difficult to get a bike up to flat in the first place, and once it’s inside there’s no space to store it.

We were joined by Steve Falconer, Maintenance Officer, who explained why bike storage can be a problem: “residents store them on the landings, which is a health and safety issue”. He showed us bikes blocking hallways, doorways and a child’s bike that had to be kept in the bin store. Hardly accessible or inviting. 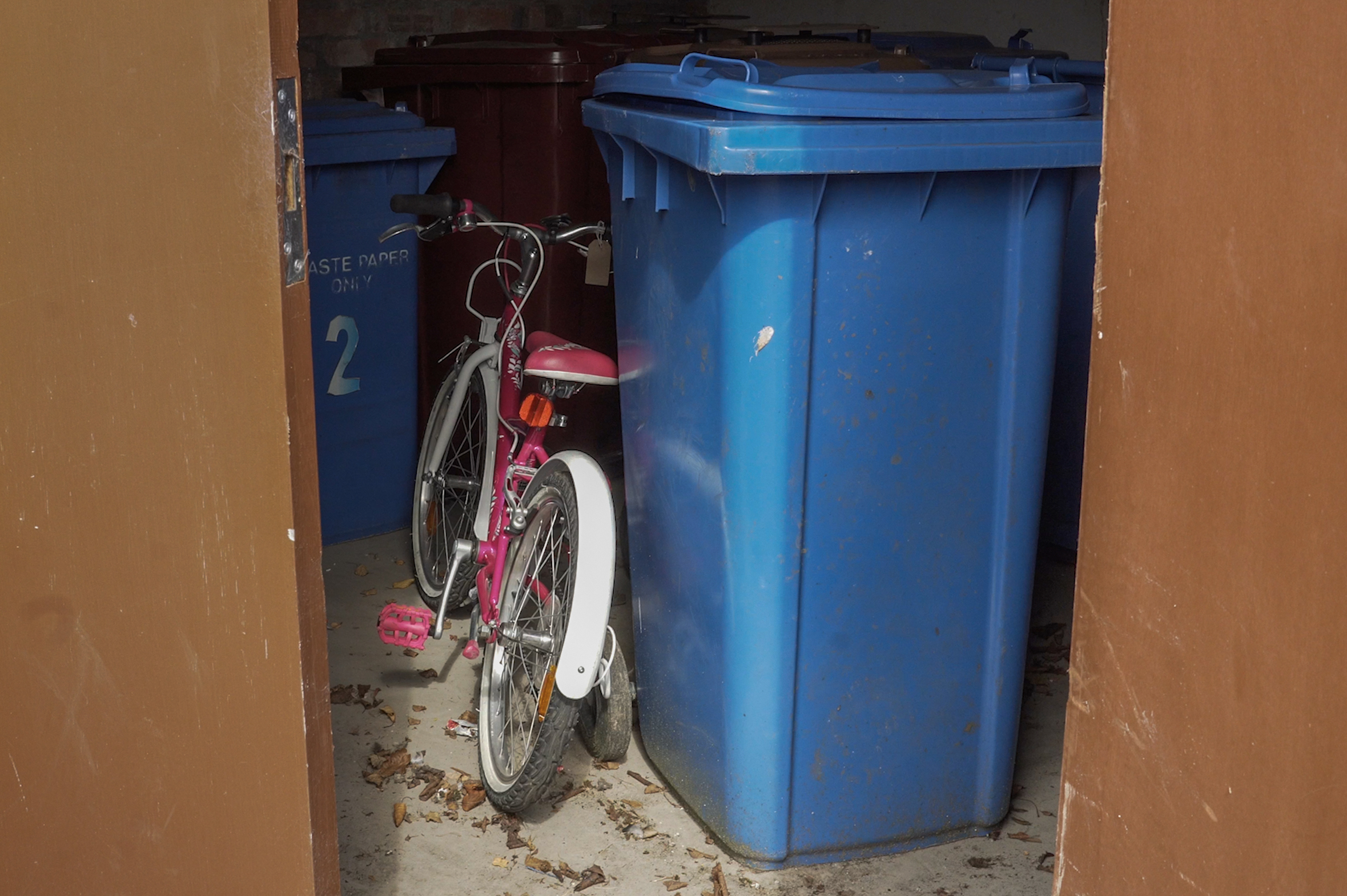 Living in a small flat in Glasgow, I can empathise: I keep my bike inside my flat, it doesn’t take up too much space but it’s not ideal and I still have the daily hassle of carrying it up two flights of stairs or squeezing in to the lift as there is no alternative cycle storage available. If I had a family, or others living with me who also relied on a bike for their everyday journeys, then this would not be a practical solution.

Why it’s an issue

Our research highlights just how much of an issue this is: in Scotland, one in three households don’t have anywhere safe or secure to store a bike, and this impacts an estimated 1.5 million people.

This is particularly an issue for people living in social housing: almost half (46%) of residents are unlikely to have somewhere to store a bike and resort to locking bikes in communal closes, stairways, balconies, on railings or outside in the street. Storing your bike in a communal area not only blocks passageways and is a fire risk, but is a potential cause of conflict with neighbours, whilst the alternative is to lock it outside and hope it’s still there in the morning. Earlier in the year, a freedom of information request found that, incredibly, a bike is stolen every two hours in Scotland.

You can imagine just how devastating it is for your bike to be stolen, especially if it’s your only way of getting about. Lower socioeconomic groups are less likely to have access to a car and struggle with rising public transport costs, so a bike, and somewhere safe to store it, is vital for people to have equal access to be able to reach work, education, shops and services.

The impact of secure storage

Back in Dundee, Steve walked us around to see the new shelters, explaining that the criteria for where to put them was “for easy access, well lit, secure location”.

The shelters were close to the main doors of the flats, easy to access and surrounded by decent lighting – I could imagine how much more reassuring it would feel, coming back on my bike at night, to lock it up in the metal lockers that weren’t hidden around the back of a building in the dark but right by my front door under a streetlamp.

Lydia explained how they engaged with tenants: “we handed the keys over at their front doors, explained how to use the lockers and that there was no extra fee on their service charge – they were free for people to use. Overnight, landings were cleared, all but one of the lockers were filled and bikes were being used.”

We have recently launched a new Residential Cycle Storage & Parking Fund, funded by Transport Scotland, which will provide £2 million to local authorities to support the installation of secure bike parking facilities.

Find out more and apply

Third of Households in Scotland Likely to Have No Safe Place to Store Their Bikes: New Report