Local community representatives, businesses and politicians recognised for their commitment and drive to enable more people to cycle.

The Cycling Champions of the Year Awards are promoted and presented jointly by Cycling Scotland, Cycling UK, Scottish Cycling and Sustrans Scotland.

The awards seek to recognise the individuals and organisations that have left a lasting impression on cycling in Scotland during the last year. A record number of nominations were made this year from people across the country.

“The inspiring stories we got to read while judging these awards highlighted the great work happening right across Scotland to enable more people to cycle. From visionary leadership to dedicated community service, each of these outstanding champions has helped many more people to experience the joys and benefits of cycling. They are worthy winners and we congratulate them all.”

The 2020 awards were presented to: 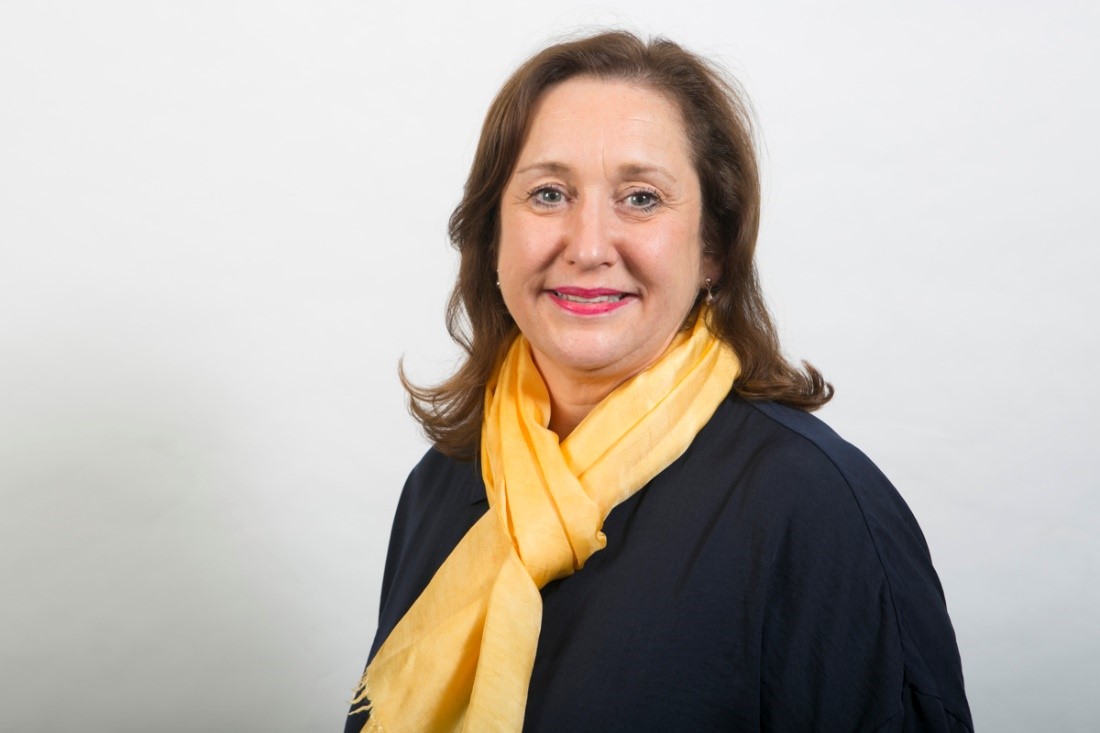 The Visionary Champion of the Year was won by Edinburgh’s Transport and Environment Convener, Cllr Lesley Macinnes. It was a unanimous decision by the panel, involving representation from all four organisations, who were greatly impressed by Lesley’s leadership in driving through ambitious change in Edinburgh, including a rapid response to Covid-19, and in making cycling more accessible to a wider audience whilst responding to a range of views.

Cllr Lesley Macinnes, on hearing of her win, said:

“It’s a great honour to be recognised in this way. Of course, the work I am doing here in Edinburgh is based on enormous levels of knowledge and support gleaned from City of Edinburgh officer teams, and the work of all the relevant organisations and individuals who have campaigned so hard over many years to achieve progress in supporting increased mainstream cycling opportunities. People have been unstintingly generous in their time and efforts to get me up to speed on key issues , as a politician with no background in this area, and have helped give me strength to push forward on many different fronts.

Sustainable transport in all its forms is clearly the key to healthier, functioning cities of the future and I’m delighted to be playing a small part in that in our capital city.”

The Delivery Champion of the Year went to volunteer coordinator Cathy Miller. The panel were inspired by the level of commitment and determination Cathy has shown in championing the use of bikes to fulfil good causes. Coordinating teams of cycling volunteers to collect surplus food from supermarkets across Edinburgh, to then deliver to various homeless hostels, food banks and charities including Streetwork, Empty Kitchens, Full Hearts and Refugee Community Kitchen. 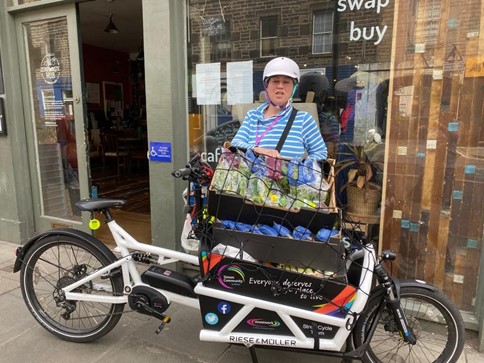 Cathy’s passion and infectious enthusiasm has created an army of around 60 cycling food collectors. During lockdown Cathy organised cargo bike donations, managing regular maintenance and storage of the bikes, as well as appropriate hygiene and PPE equipment for volunteers. As many of the collectors are on electric cargo bikes (filled to the brim with food), the initiative has drawn a lot of attention from the public, who are interested in the bikes and surprised with how much they can carry. The collections are often shown on social media expanding the reach even further and showing what can be done just by using bikes alone.

“I’m delighted to win this award. It is so nice to be recognised for the work we are doing, but I could not do it without the wonderful team of volunteers we have and the generous support from supermarkets. The initiative has grown tremendously in the last 6 months and I’m thrilled that we are showing what can be done on bikes. I’m a big believer in cycling and the many benefits it brings to individuals, communities and the environment.”

The Business Champion of the Year was presented to Civerino's Slice, a pizzeria in Edinburgh, who showed courage and leadership by embracing the pop-up infrastructure during the Covid-19 pandemic, when many other companies could only see the downsides. 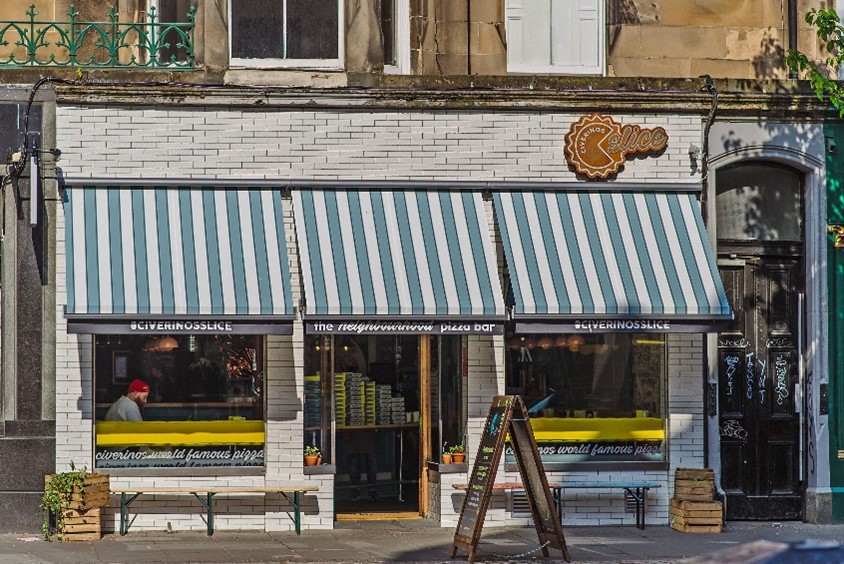 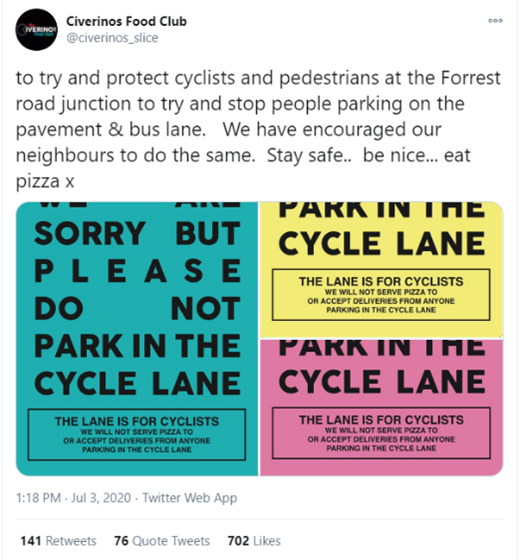 Civerino's Slice bravely made a very public pro-cycling statement that they wouldn't serve anyone parking in the cycle lane outside their shop. A lot of other businesses had a negative reaction to the new pop-up infrastructure, but Civerino's Slice’s attitude was a shining example of how businesses can benefit from increased numbers of cyclists and pedestrians.

Another policy they adopted was offering discounts to people who collected their pizzas by bike, furthering their pro-cycling stance and encouraging more people to cycle as a result.

The Cycle Shop Champion of the Year was won by Heaven Bikes in Sutherland, who perfectly demonstrated the importance of having a cycle retailer in the heart of a community, selling ‘cycling’ as much as selling bikes and products.  Heaven Bikes are a great example of how a retailer helps with the collective aim of making cycling accessible to all and reaching new audiences. 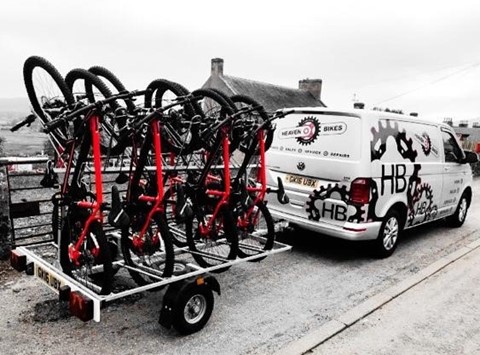 “Scottish Cycling is pleased to support the 2020 ‘Cycling Champions of the Year’ Award with our partners at Cycling Scotland, Cycling UK and Sustrans. We are delighted for all of the winners, whose passion and commitment to cycling shone through in their nominations; and thank everyone who took the time and effort to nominate.”

Sustrans Scotland is proud to continue to support the 2020 ‘Cycling Champions of the Year Awards’. It’s inspiring to see the dedication, enthusiasm and, in particular this year, innovation in helping to support more people to access cycling during a challenging time. Congratulations to all the winners!

“The achievements of the cycling champions have provided us with hope in a very challenging year.   It has been inspiring to come together with partner organisations to recognise the success and celebrate good news of the winners in each category, who each demonstrate the positive impact cycling has on our communities and wellbeing.”