Guest blog: Safer streets for all 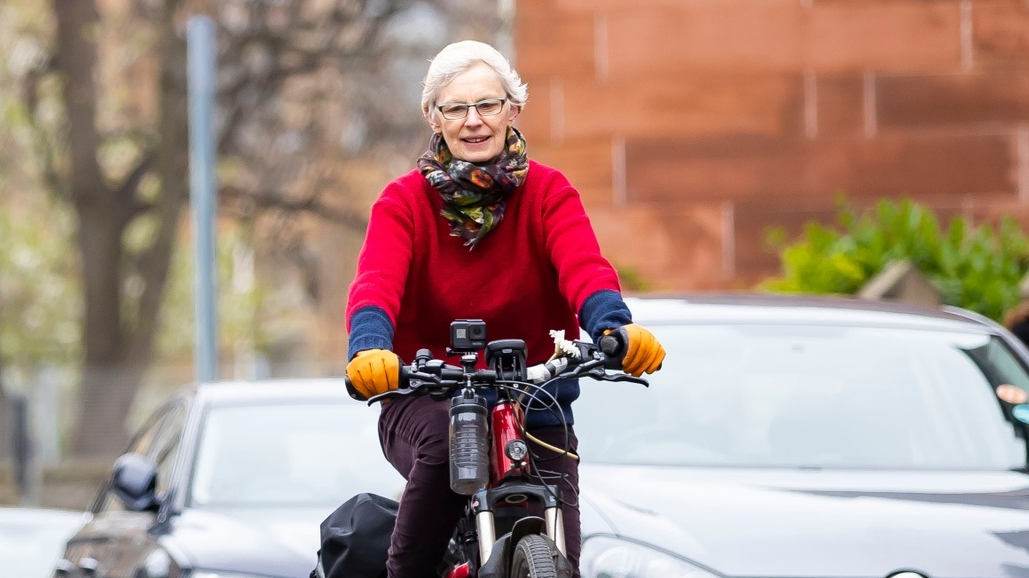 Earlier this year, campaigner and InfraSisters founder Kirsty Lewin closed the 2022 Cycling Scotland Conference with a powerful and personal keynote speech, on the need for inclusive cycling infrastructure.

In our latest guest blog, Kirsty visits key themes from this speech, sharing her thoughts on how our streets need to change to make cycling more inclusive.

In 2008, I was cycling to work in Edinburgh. The route, with heavy traffic and many HGVs, had no safe infrastructure. I ended up under the wheels of a tipper lorry.

That avoidable incident changed my life and cost the NHS and my employer tens of thousands of pounds. My mobility has been permanently affected, I haven’t been able to run since being run over, and over the last few years have developed severe arthritis in my knee which has made walking so difficult at times that even the local bus stop has been too far for me to get to.

I did get back on my bike, I had to: I didn’t and don’t have a car, and I love cycling. Importantly, during periods when walking is too painful, I use my bike as a mobility aid. My bike is essential for functional and social trips. But while I cycle most days, much of that cycling isn’t comfortable. In Edinburgh I am regularly close-passed by drivers, suffer near-misses at junctions, and am verbally abused by drivers who just want me off the road.

I’m often asked as a cycle campaigner, what is it that drives me to keep pushing for streets that are safe and comfortable for cycling, even when the forces against us feel overwhelming? The answer is simple. Everyone who wants to cycle should be able to cycle on our streets. Everyone, of course, includes the disabled people, women, and children who could cycle, but are prevented from doing so because of poor infrastructure and unpredictable and often dangerous driver behaviour.

In recent years there have been some improvements, for example the roll out of 20mph speed limits in Edinburgh. In some parts of the country major schemes to improve road safety and comfort for cycling have been delivered or are underway. Increasingly, ambitious plans are being published as local leaders, politicians and planners recognise the unmistakable climate and public health benefits of supporting active travel.

But too often these same organisations fail to get the basics right. Endemic pavement parking, for example, remains an embarrassing and dangerous scourge in Scotland, as does the lack of dropped kerbs. The inconsistent and generally poor provision of safe and convenient on-road cycle infrastructure, comfortable and direct enough for everyday trips, remains the most obvious omission.

It’s disheartening that, in 2022, we still have to campaign for safe streets in our local neighbourhoods. That, in 2022, so many people, especially women and girls, are still anxious or unwilling to cycle on our roads and off-road paths.

And while things are slowly changing for the better, many disabled people who could use cycles or adapted cycles are still denied that opportunity, in part because we don’t have the basics in place for them to get around on those cycles safely and comfortably.

Cycling is an essential transport option

In the recent Wheels for Wellbeing survey, 64% of disabled respondents said cycling was easier than walking, with cycling being efficient and pain-free, allowing them to travel further and more independently that on foot.

For some, cycling is an essential mode of travel where all other modes are inaccessible. Innovations around e-bikes and adapted cycles are continuing to make it easier than before for more people to get around although the high costs of these cycles can be prohibitive.

As a disabled cyclist, I need protected cycle lanes (not just paint) on strategic routes, I need direct routes that go where I need to go, not that meander for miles through narrow paths, barriers, chicanes or kissing gates. I need dropped kerbs on and off cycle routes, and I need dedicated cycle parking close to the front door of my destination. And, of course, I need people not to park their vehicles in cycle lanes, forcing me unnecessarily into traffic.

People who campaign for better transport access for disabled people are in the ideal position to help increase awareness that many disabled people cycle and many more would if they could – with well-designed, accessible bike lanes being a priority to make this happen.

Campaigning for safer roads for women

Those that campaign against on-road cycle infrastructure often claim that if there are already off-road alternatives, cyclists should be on those; shared use paths on old railway lines, or canal towpaths are two examples.

But this must be challenged especially when using a gender lens. These paths are often isolated, with no escape routes or natural surveillance. Some of them are renown for anti-social behaviour, harassment of women, and even assault.

Off-road routes, though often lovely leisure routes, are no substitute for the convenience, directness, accessibility and safety offered by on-street protected infrastructure which takes people exactly where they want to go.

The InfraSisters campaign, initiated by a frightening incident with a man on an isolated off-road path, highlights the need for safer roads and more protected infrastructure on our streets. In Edinburgh, only 17% of women residents cycle at least once a week compared to 35% of men; a quarter of women say they don’t cycle but they would like to.

The InfraSisters mass participation rides are organised, led and marshalled by women but everyone is welcome to come. While they create a friendly, carnival atmosphere, dressing up bikes with fairy lights and pumping out music from cargo bikes, the message is serious: councillors must prioritise night-time cycling infrastructure that’s safe for women and girls. And safe roads for women and girls mean safer roads for all.

What will you do?

We cannot afford to waste any more time.

To achieve Scotland’s ambitious targets – on traffic reduction and encouraging much more cycling, wheeling and walking for local journeys – we need equally ambitious action. As cycle campaigners we can add value, we can be critical friends, we can be the eyes and ears on the ground.

But we need politicians, and transport professionals and planners to step up, be bold and to speed up delivery of the high-quality improvements we’ll all benefit from. At the same time, we need an end to badly designed schemes and policies that reduce opportunities for people to cycle safely and comfortably. We cannot compromise on safety and equality in the face of the climate crisis.