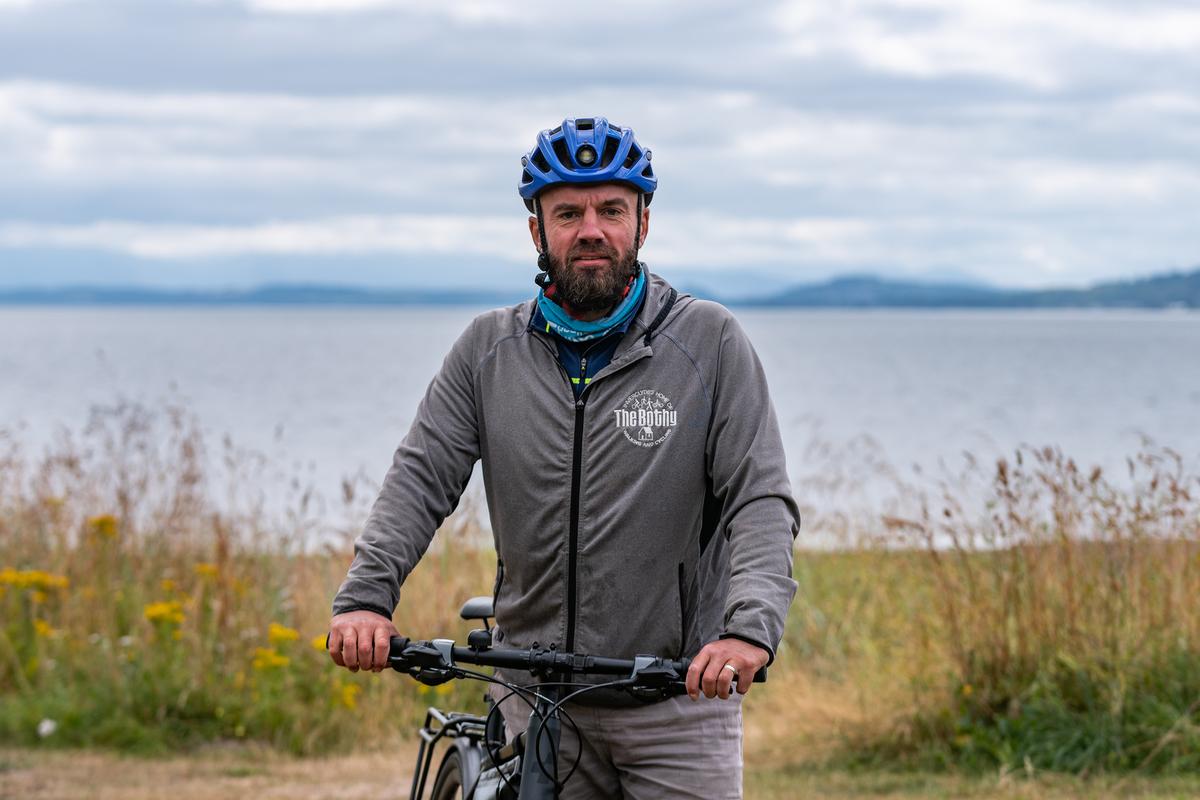 This post was updated on 15 November to include tributes and memories from his colleagues and friends.

Cycling Scotland’s staff and cycle instructors were devastated to learn of the death of Keith Fergus on Friday 4 November, aged just 49, after a courageous battle with cancer.

As one of Scotland’s leading Cycle Trainers, Keith’s contribution to the cycling community was enormous. Working with many organisations across Scotland, he shared his passion for the outdoors and love of cycling with thousands of people across the country.

Keith has made a huge impression on the people he supported, and those he worked beside. His energy, enthusiasm and commitment ensured that he formed enduring relationships.

Along with many members of our cycling community, we will greatly miss Keith. We are grateful to those who have reflected on what Keith meant to them, and shared their memories:

Greg Brown was the Bikeability Scotland Coordinator for East Renfrewshire from 2013-2017, He recalls first meeting Keith in 2013, through the Neilston Development Trust, and the impact he had on ensuring every child had the opportunity to participate in on-road training:

"Keith’s passion, enthusiasm, and desire to be involved was evident straight away. Within a year our cycle training programme had grown from a handful of schools to every primary school delivering on-road training to over 1000 pupils annually - a first in Scotland.  Keith played a huge part in this success.

He had a natural affinity and connection with the pupils which is a rare ability and was a joy to behold. School staff praised his manner, communication skills, his can-do attitude and incredible ability as a trainer.

Keith then became a Bikeability Scotland Coordinator and his leadership and people skills helped improve and grow the training. Realising Keith’s ability to influence and inspire belonged at the national level, I asked Cycling Scotland to come along and watch him in action. They then invited him to join their group of Tutors operating nationally. He accepted and went on to influence and inspire trainees, and his fellow Tutors, in all corners of Scotland from the Borders to Shetland.”

Baligh Shaar was the Bikeability Scotland Coordinator for Glasgow until 2021.  An accomplished cycle trainer himself, Baligh also recalls being struck by Keith’s abilities to make connections and support training.

“Keith has left a huge impact on me because he was a gentleman; very thorough in his work and in the way he represented himself.  He was always happy and willing to assist. My Daughter Iyona told me that some of her Bikeability Scotland lessons were getting delivered at her primary school. She had the cheek to mention that this particular instructor explains his Bikeability Scotland lessons better than I did, and that he connected so well with the pupils/class.  Sure enough, it was the one and only Keith.

As coordinators, we were all committed, but Keith was miles ahead when delivering Bikeability Scotland cycle training.”

Brian Salvona, one of Cycling Scotland’s longest-serving tutors, was initially a mentor to Keith.  Very quickly they developed a deep friendship.

“When Keith joined the pathway to becoming a Tutor, it was my privilege to be his mentor. He applied considerable energy in progressing his training and he was meticulous in his preparation for the courses he ran. I especially remember the cycle trainer course he ran from Glasgow Green in typically wet Glasgow weather. He had some challenging candidates but managed everything well and brought the course to a successful conclusion.

I got to know him when we did a further quality assurance job in Aberdeenshire and discovered mutual interests in the outdoors and in photography. We seemed to hit it off and became friends as well as colleagues.

Keith was the author of many walking and touring guide books of which at least ten are still listed on Amazon. He was also a regular contributor to The Scots Magazine.

Whatever type of work Keith did, he saw through the issues, had clear-cut views and took decisive action. He was a man of principle and lived by them in his professional and personal life. He was a man who got things done!

When Keith was diagnosed with cancer and throughout his treatment, I never heard him say a negative word. He was positive and optimistic right up until the last conversation I had with him the week previous to his passing. A friend and a colleague, I will miss him."

"Keith was knowledgeable, experienced and completely unassuming. He treated everyone with the utmost respect and was quietly decisive in his approach.

John and I spent a memorable day with him, during lockdown, filming a promotional video. We had to make four people appear like many more so we kept swopping jackets and helmets.  It was completely ineffective but very funny!  Keith made us cycle miles that day, but he cycled it all with us and kept us going with good cheer.

In conversation his joy of outdoor activities and the Scottish landscape was infectious. His books will be my inspiration to walk for a long time to come!"

“Keith stood out as someone that was enthusiastic, keen to learn and improve not only his delivery but to create new opportunities in his local authority.

We co-delivered all over Scotland, including Orkney and the Western Isles, where Keith lived by his values – making the most of the long evenings by getting out on his bike even after a long day of training delivery.

My overriding memory was delivering level 3 training together in Thurso. The children’s teacher, Karen, had done a brilliant job training her class during Level 2 which meant that Keith and I could challenge them in the busier town before we battled against a strong headwind along the coast road to return to our final destination. The children and their teacher were bursting with enthusiasm.  Keith and I were completely buzzing – the day had been brilliant; we had such a fun day and we were so chuffed to have been able to work with such a willing group. It was sad to say goodbye to them at the end of the day.

Keith was always so positive; he wasn’t a glass-half-full person – he was a GLASS FULL person. Even during the summer, when he was having treatment, we went for a walk and he was talking about his future plans once his treatment was completed. Keith’s passion for cycling and cycle training was sincere and inspirational.

Although he is gone, he will not be forgotten and I will miss him as a colleague and friend.”

“I met Keith for the first time nine years ago. I had just finished my course as a parent volunteer and got into East Renfrewshire’s Bikeability Scotland team shortly after. My son was in P6 and Keith had signed my son’s certificate (and I still have it by the way).

Keith was very welcoming and offered us lots of training opportunities to get better and better.

Over the years he was fantastic in supporting me to become a Bikeability Scotland Instructor and later in signing up for the Tutor training. He believed in my abilities more than I did and he always pushed me when I had my doubts.”

Having started out in East Renfrewshire’s instructor team, Jenn Ferguson has also joined the pathway to becoming a tutor, supported by Keith.

“When I first met Keith, I remember thinking “this guy knows his stuff” - little did I know what an impact he would have on me over the years to come.

With great success, Keith also set up Bikeability Scotland Level 3 within East Renfrewshire where I was lucky enough to deliver sessions alongside him and I learned a great deal from him during this time.

Unsurprisingly Keith was also the “social convenor” and we had memorable nights out which usually involved him getting on the train at Neilston and then collecting all his team as it passed through the East Renfrewshire stops!

He was a fantastic mentor and support to me, and I couldn’t have done it without him.”

Keith’s talent and skills were in high demand by many organisations. Josh Wood, Senior Project Officer with Cycling UK enjoyed working with Keith at Inverclyde Bothy.

“Keith worked incredibly hard to develop and grow cycling in the Inverclyde region and he has left a lasting legacy there – the Inverclyde Bothy is extremely well thought of by so many individuals and organisations in the region, in large part due to Keith’s work.  It is very difficult to articulate how what Keith did was so unique.  He was just one of the very best at what he did.

It feels funny to write this as my overwhelming memory of working with Keith is that it never really felt much like work. It was always hugely enjoyable, filled with laughs and his genuine passion and belief in the good that cycling can do made him such a great advocate for all things bike. We would regularly cycle from Paisley to Greenock together hatching various plans about cycling and life in general.  I have very good memories of so many bike rides with Keith where he would talk so lovingly about his family.  Also, his refusal to ever let me buy him a coffee (cake and a can of coke, absolutely – but never coffee!).

Keith Fergus was my wonderful friend and a better colleague I could not wish for – I have found the way he approached life (especially since his diagnosis) a total inspiration and I shall miss him terribly. Thank you for being my friend Keith.”

“I remember his positive attitude, his smile and his laugh. He was passionate and knowledgeable, with a passion to pass on that love and joy he had for cycling.  Time always flew by when you spoke to Keith. Keith was one of those special people you seldom get to meet.”

For all the different roles and activities Keith put his energy into, his priority was always the delivery of Bikeability Scotland in his home authority.  Paul Holland, Prevention Services Manager with East Renfrewshire, paid tribute to Keith’s impact.

“Keith's passion for cycling and encouraging kids to cycle safely was infectious and relentless. Tens of thousands of kids have benefited from the hard work and enthusiasm of the Bikeability Scotland Team.

Keith and his colleague Derek Whittle were a great double act like "Morecambe and Wise".

Paul highlighted that it was Keith’s drive, supported by his colleagues, that helped ensure Bikeability Scotland delivery was kept going throughout the Covid-19 pandemic at the Education Hubs, during a period when so much other activity was halted.

“He was loved and appreciated by his dear friends and colleagues in Prevention Services and Bikeability Scotland. The best tribute you can do for Keith is to get on your bike.”

Keith’s funeral took place at the Hurlet Crematorium on Friday 11 November, with a huge number of people present to pay tribute.

Our sincere condolences to his family, friends and all who knew him.

We will all miss you terribly Keith.

Throughout his treatment, Keith received support from the Beatson Cancer Centre. Keith’s widow, Helen, has set up a fundraising page for the charity in Keith’s name.

Schools across the country take advantage of Bikeability Scotland training