Three quarters of people living in Scotland don’t know they could get three points on their licence for driving too close to someone cycling.

Three quarters (73 per cent) of people living in Scotland don’t know they could get three points on their licence for driving too close to someone cycling, according to the findings of a poll revealed today (Tuesday 7 May 2019).

Commissioned by the nation’s cycling organisation – Cycling Scotland – to mark the launch of its annual cycling road safety campaign, the YouGov survey of 1,012 people in Scotland highlights a lack of awareness about the legal consequences of not leaving at least a car’s width when driving past someone riding a bike.

It is a careless driving offence for motorists to close pass someone cycling and puts lives at risk. People can get a fixed penalty of three points on their driving licence and be fined £100 – or receive a criminal conviction for more serious offences.

Cycling Scotland chief executive Keith Irving said: “Whether cycling or driving, we’re all just trying to get from A to B and most people do so with consideration for other road users. Unfortunately, there are also some who don’t. People who cycle regularly are likely to experience a “very scary” close pass incident every couple of days and cycling casualties are increasing, in line with cycling’s growing popularity. Every week in Scotland, at least three people cycling suffer serious, potentially life-changing injuries, usually from a collision with a vehicle.

“Cycling has huge benefits for both physical and mental health and to encourage even more people to cycle, we need to make sure people feel safe cycling on our roads. Our new TV ad campaign shows how it can feel to be close passed and increases awareness of the legal consequences for people driving too closely to someone cycling.” 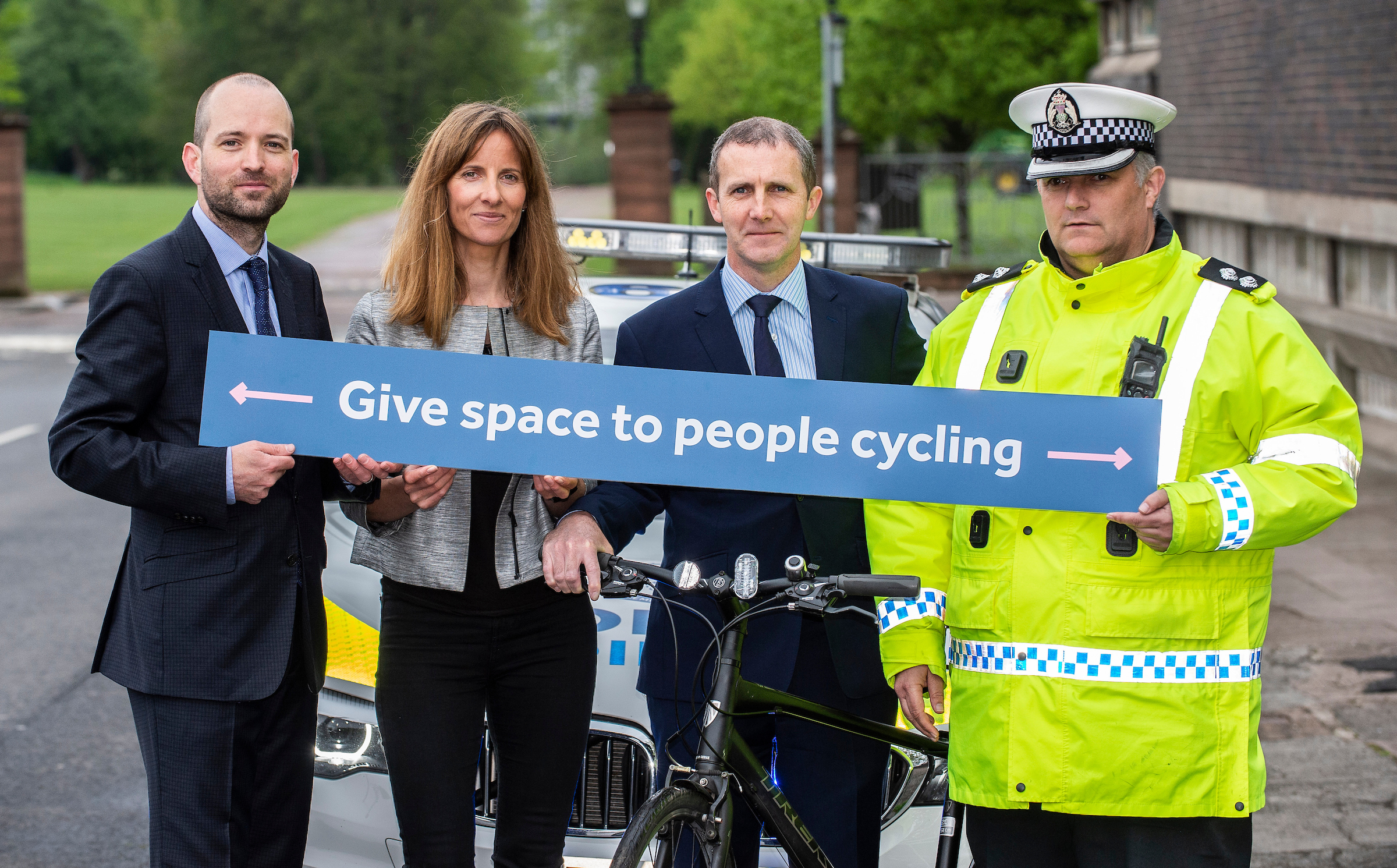 Cabinet Secretary for Transport, Infrastructure and Connectivity Michael Matheson, said: “Driving too close to a cyclist can put lives at risk. This joint campaign between Cycling Scotland and Police Scotland will help raise awareness of the importance of safe passing distances and remind drivers of the action that the police will take if cyclists are put at risk. I welcome this campaign, which supports the Scottish Government’s ambitious 2020 casualty reduction targets. We are committed to improving road safety and encourage all road users to adhere to the rules.”

The campaign – which will run on television and social media until 2 June 2019 – is supported by Police Scotland, whose innovative Operation Close Pass initiative takes place across the nation.

Operation Close Pass sees a police officer in plain clothes cycling with a camera on their handlebars and the back of their bike. When they are passed too closely by a car, the police cyclist radios details to colleagues further up the road who pull over the motorist and direct them to a spot where another officer is waiting to talk to them about their driving.

The chat takes place by the roadside on a giant mat showing the correct minimum passing distance, usually defined as 1.5 metres. If someone is unreceptive to education then they will be cautioned for careless or dangerous driving and receive a court summons.

Inspector Andrew Thomson said: “Police Scotland is pleased to support the Cycling Scotland Road Safety Campaign. Keeping all road users safe is a key priority for us and this campaign highlights that cyclists are vulnerable when being passed by vehicles too closely. Driving too close and not allowing sufficient cycle space when passing is an example of careless driving, and the minimum penalty for this is three penalty points and £100 fine. Officers from Police Scotland will be working hard to raise awareness of this offence and encourage all road users to use the roads with respect for others."

Cycling Scotland has undertaken independent research with 500 people each year over the last four years, which shows there is generally good knowledge of the amount of space drivers should give people cycling. This research, together with three focus groups involving 50 people held in Glasgow, Edinburgh and Aberdeen in December 2018, and creative testing with groups in February 2019, has helped inform the new campaign. Recent focus group attendees stated:

43-year old writer and mum, Diana Farrell from Edinburgh, cycles regularly. She said: “Close passes are a daily occurrence whether I am alone on my road bike or cycling my children to school on our cargo bike. The school run is the worst as the roads are very busy and the drivers seem to be at their least patient. What upsets me most about this is the fact that some drivers are prepared to risk our lives for a few seconds. Yes, bikes can be slow, but I have never had a car stuck behind me for more than thirty seconds, and who really does not have thirty seconds to spare?”