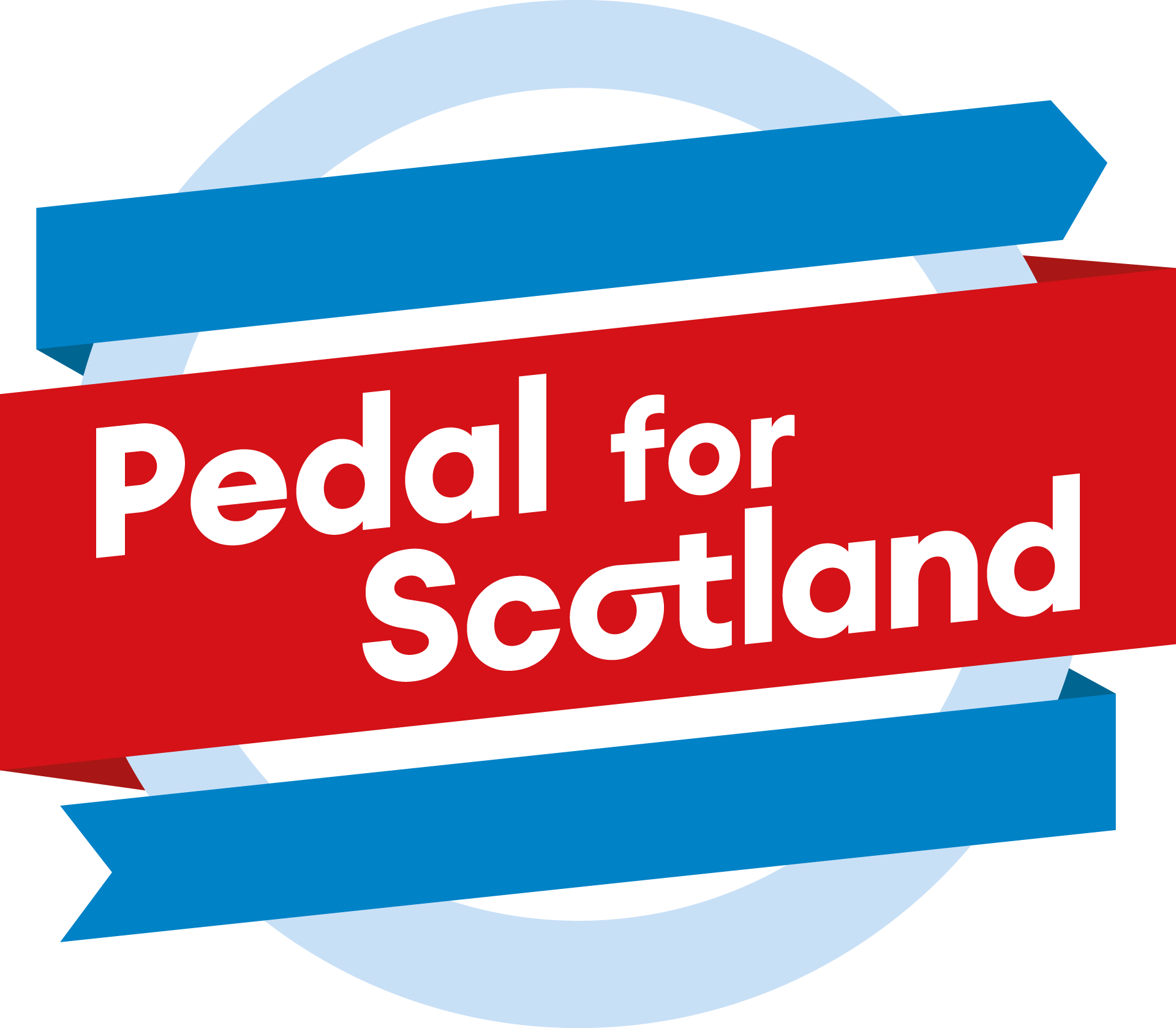 Over 800 people joined us to take part in four beginner-friendly Pedal events. These free, local rides took place in Ayr, Irvine, Glasgow and Dundee with the goal of providing opportunities for people new to cycling, families and older people.

Riders who didn't own a bike were able to borrow standard or adapted bikes to take part in the cycle.

All events featured a traffic-free route highlighting local cycle paths that participants can use beyond the event. The rides also provided a small event village at the finish line to encourage engagement with the local community.

Alongside these, we also funded seven smaller events across Scotland to provide more opportunities for people to experience the joy of cycling.

Over a thousand people took part in four free, beginner-friendly Pedal for Scotland events held in Ayr, Lerwick, Highland Perthshire and Falkirk between August and October 2021.

Each event was held on a route that was marshalled, closed to traffic between 5 and 8 miles long.

They provided a welcoming, safe and fun environment for people new to cycling and families. These were organised by local community organisations and helped to showcase local cycling infrastructure and routes.

The events were accessible to everyone, with adapted bikes available to hire.

Feedback from the events was very positive, with 72% of participants giving the route top marks in a post-event survey and 73% giving the same highest marks to the atmosphere of the event.

Pedal for Scotland also funded nine, smaller capacity, new cycling events across Scotland, from Dumfries & Galloway in the south, to the Highlands & Islands in the north.

This was to be the first year of Pedal for Scotland’s evolution into free local events across Scotland.

However, due to the global Covid-19 pandemic, it was not possible to host events in 2020.

Instead, we opened a fund for community organisations to apply for grants to organise free, beginner-friendly cycling events when it was safe to do so.

More than 8,000 people from around the world got on their bikes on Sunday, 8 September 2019, to celebrate Pedal for Scotland’s last ride.

With participants ranging in age from a nine month-old (on a tag-along) to an 82-year old, riders completed more than 325,000 miles.

2019 marked the 20th anniversary of Pedal for Scotland, which has grown from 425 participants in 1999, delivering an estimated £1.1m for the Scottish economy every year.

The closed-road Glasgow-Edinburgh ride has created a legacy for cycling in Scotland:

From 2020, Pedal for Scotland will evolve into shorter, local and free events in an effort to help more people enjoy cycling, regardless of income.

Nearly 7,000 people took to their bikes on Sunday for the nation’s largest cycling event. With participants ranging in age from a one year old on a tag along to 88 years old, riders completed a combined total of 294,000 miles.

Capital Scotland Breakfast Presenter Des Clarke took part on the 45-mile route on closed roads from Glasgow to Edinburgh as one of the 5,200 riders doing the Classic Challenge.  Des only learned to cycle earlier this year at the age of 37 years and is delighted to have taken part in his first Pedal for Scotland.

Many participants were raising money for our official charity partner, The STV Children's Appeal, who work to help children and young people affected by poverty.

Scotland’s Minister for Transport and the Islands, Humza Yousaf MSP, led the charge from the Glasgow Green start line, joined by a host of STV stars including Peter and Roughie and Heart FM's Breakfast presenter Robin Galloway.Over 10,000 people on bikes showed their pedal power this year as they took part in Pedal for Scotland – celebrating 19 years of Scotland’s biggest bike event.

Many participants were raising money for children and young people affected by poverty by supporting the event’s official charity partner, The STV Children’s Appeal.

Many participants were raising money for children and young people affected by poverty by supporting the event’s official charity partner, The STV Children’s Appeal.

In 2015, on our 17th anniversary, around 10,000 riders took part over 6 rides across Scotland. Pedal for Scotland took place on 5th, 6th and 13th September with six rides to choose from catering for all ages and abilities.

Over 10,500 riders Pedalled for Scotland in 2014. Rides took place in Glasgow, Edinburgh and Aberdeen across three gloriously sunny weekends in September.

Around 8,000 people on bikes showed their pedal power on 7th September as they took part in the 47 mile Challenge ride, the 110 mile Sportive and two Family rides of 9 and 4 miles. Over 6,500 riders took part in the 47 mile Challenge Ride and over 700  took the on the 110 mile Sportive, which takes a different route through the Southern Uplands and features over 2,400 metres of ascent. In addition, around 600 riders took part in family-friendly events in Edinburgh.

Transport Minister Keith Brown was joined by round the world cycling superstar Mark Beaumont, STV presenters Sean Batty and Raman Bhardwaj and The Angels’ Share star Paul Brannigan on the startline of the 2013 freshnlo Pedal for Scotland, in partnership with Decathlon

Over 12,000 cyclists of all ages and abilities tackled 5 different rides which included the 47 mile Challenge Ride between Glasgow and Edinburgh, the 110 mile timed Sportive, the Edinburgh Family Ride which allowed younger cyclists and their families to join the last nine miles of the Challenge Ride route and finish in style at Murrayfield Stadium and for the first time the Aberdeen Family Ride (15th Sep).

9 September, 2012: A summer of cycling heroics reached its peak with over 8500 people saddling up to join Mark Beaumont and Transport Minister Keith Brown riding the Pedal for Scotland event.

Participants rode their way through a combined distance almost equivalent to the moon and back across two events. Over 7600 cyclists of all abilities tackled the 47 mile Challenge ride between Glasgow and Edinburgh while over 800 people finished the 110 mile timed Sportive ride through the Southern Uplands which this year featured 2400m of ascent to pose an even stiffer challenge.

£750,000 has been raised for 4 year official charity partner Maggies.

£139,099 was raised for the main charity partner Maggies.

£139,099 was raised for the main charity partner Maggies.

A new 100 mile Sportive ride was added to the event with 683 taking the longer route to Edinburgh through the Southern Uplands and over 300 took part in the first family ride in Glasgow Green.

£231,789 was raised for the main charity partner Maggies.

Pedal for Scotland 2009 attracted over 7,000 riders. Piper Andy Low piped the riders off from the starting point, with a little help from stunt bike sensation Danny MacAskill.  Elaine Brewer, 30, from Dennistoun, was one Glaswegian who enjoyed her day in the saddle.

She said: “This was my first Pedal for Scotland event but it won’t be my last.

It was pretty tough, especially the last ten miles as we came into Edinburgh.

But it was worth it and you get a real sense of achievement knowing you have cycled from one side of the country to the other.”

£233,633 was raised for the main charity partner Maggies.

Taking place on the 14th of September the weather stayed perfect for the ride, cloudy and dry so not too hot. The event, attended by 5,700 riders, was started by Mark Beaumont who had just cycled 18,000 miles around the world, “I really enjoyed taking part in the ride, talking to cyclists on route and hearing great enthusiasm about cycling from both experienced and new riders. Pedal for Scotland is a great event for the whole family and it’s fantastic to see so many people taking up the challenge.”

Pedal for Scotland 2007 saw the Cabinet Secretary for Health and Wellbeing Nicola Sturgeon MSP and Alastair Campbell start the ride at a slightly wetter than wet Glasgow Green. However, it did not stop over 4000 riders from cycling the 50 mile journey from Glasgow to Edinburgh on the 16th of September.

£138,000 was raised for Leukaemia Research and finished at Victoria Park in Edinburgh for the first time

2700 riders took part including Nell Nelson and Tony Doyle, up a staggering 1200 from the previous year, which made the event Scotland’s biggest ever mass bike ride. The cycle from Glasgow to Edinburgh on Sunday, 27 August raised funds for Leukaemia Research, the official charity partner for Pedal for Scotland 2006. The event had tremendous support and was started by The First Minister. Jack McConnell commented:

“Pedal for Scotland is a great Scottish event, and it’s very encouraging to see a huge increase in participants this year. The record number of cyclists taking part proves that cycling is an increasingly popular pastime as people think more about their personal health and our environment.  But it’s also good to see so many people giving up their Sunday to raise money for Leukaemia Research.  I hope the fundraising will break records too.”

The event was also sponsored by the Tour of Britain, T- Mobile and Marshalls Pasta and was run in conjuntion with a criterium race in George Square and the start of the Tour of Britain with Ian Aitken taking over the management of the event.

The event finished at Roseburn Park in glorious sunshine.

28th of August: Pedal for Scotland partnered with the Tour of Britain to create a cycling weekend. A criterium race took place in George Square on Friday evening with Pedal for Scotland’s slightly controversial change in direction with the ride starting in Edinburgh and finishing in Glasgow.

The ride was started at Roseburn Park by the Lord Provost of Edinburgh Lesley Hinds. Unfortunately this meant the record 1500 riders were cycling into the prevailing westerly wind, and so despite a great event all round, the format was changed back to Glasgow to Edinburgh forever after.

£115,000 was raised for official charity partners Barnardos and CHILDREN 1st

The very first year that Cycling Scotland took over the event which started in George Square Glasgow and ended at Meadowbank Stadium Edinburgh on the 19th of September. The event attracted over 1060 participants and was managed by Michael Adiscott from Cycling Scotland.

£95,000 was raised for official charity partners Barnardos and CHILDREN 1st.

Nearly 950 took part in this year’s Pedal for Scotland which was held on the 14th of September.

Approximately 900 people took part in Pedal for Scotland on the 15th of September, including 29 riders from Sun Micro Systems based in Linlithgow. Official charity partners for the event were Barnardos and  CHILDREN 1st events and volunteer manager, Laura Peacock, said: “We are thrilled to have raised so much money to help Scotland’s most troubled children. CHILDREN 1st are very grateful for all of the participants who helped to raise sponsorship money in the 2002 event.”

The 16th of September was the date for the Pedal for Scotland 2001 which saw 1013 riders taking part, including a 16 strong team of Dutch riders who entered while on a visit to Velo-city.

£45,000 was raised for official charity partners Barnardos and CHILDREN 1st.

470 people registered for the event on the 17th of September which ran from George Square to Meadowbank Stadium with a Pasta Party in Linlithgow. It was a bright but overcast day with a mild westerly wind. Transport services for riders and their bikes were supplied by First Bus and The Scottish Transport Regimental Army.

£40,000 was raised for Barnardo’s(Scotland) and CHILDREN 1st who were the official charity partners.

Thanks to the hard work and efforts from the team, headed up by Gareth George, who came up with the idea for the event, Brian Curtis and George Di Ponion, in association with the Scottish Cycling Development Project (SCDP), the first event took place. 425 cyclists set off from George Square in Glasgow and finished at Holyrood Park. The event raised £60,000 for 16 different charities and marked the start of the now biggest bike ride event in Scotland.